There seems to be a horrible lack in good grammar and spelling online. I've seen it in websites, emails and social media, but product launch materials are the worst offenders. 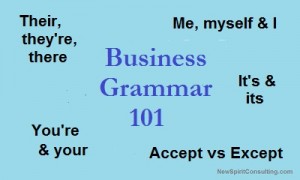 You may be thinking, 'What does it matter if my customers understand what I'm saying?'

First, are you sure they understand you?

And please tell me you didn't abbreviate it to 'thru.' That's fine when you're texting a friend, but not okay in business writing.

Second, poor spelling and grammar tells your customers that you don't really care about them. You haven't taken the time to be complete and correct. That can make them wonder whether the product or service you offer is also slip-shod.

Often misused words and how to use them correctly:

To figure it out, try substituting 'they are' - if it makes sense, use the contraction 'they're.'

If it doesn't make sense, are you talking about possession? Try substituting the word 'our.' If the sentence still makes sense, use 'their.'

Are you talking about a place? Try substituting 'here' for 'there.' It can also mean something exists, such as, 'There are two dogs.'

To make it more interesting, there is another word that sounds the same, but you probably won't use very often. 'Wether' is a castrated male sheep.

If you're comfortable with sentence structure, effect is a noun and affect is a verb. Some people use the phrase 'Affect the Effect' - in other words something happened (affect) that caused a consequence (effect). You can try substituting 'consequence' and if the sentence still makes sense, use 'effect.' Otherwise 'affect' is probably correct.

Me, myself and I

Another of my pet peeves is the incorrect usage of me, myself and I. For some reason people are afraid to use the word 'me' and stick 'myself' in there where it doesn't belong. Generally speaking, if you're trying to emphasize your role in something and have already used the word 'I' in your sentence, you can add 'myself' - 'I kept half the loot for myself.' Otherwise don't use it.

More problems occur when someone tries to quote a familiar saying and gets it wrong. Recently I was reading some marketing material from a large, well-known company and a phrase - 'take the reigns' - brought me to a screeching halt. The correct phrase is 'take the reins.' Reins are the leather straps the stagecoach driver uses to control the horses in old western movies.

The writer was trying to say their customers should be in control - thus 'take the reins' - but got confused with the word 'reign' which means royal rule or authority. Sounds reasonable, but still incorrect.

Here is a post about the difference between rein and reign. Unfortunately the mistake has become commonplace so people are accepting the mistake rather than correcting it.

And please tell me you've never used the word 'rain' - meaning water that falls out of the sky - in this old saying. I hope it's clear why it would be incorrect.

Also if you'd like to learn about the origin of some phrases, such as bite the bullet or spill the beans, check out this website.

So how do you fix these faux pas?

Look it up! Here is a very helpful website - http://dictionary.reference.com/

Another option is to use a program such as Microsoft Word to check your spelling and grammar. But remember it is just a tool and there may be times when you won't accept the suggestions. For example, some product names use creative misspellings. Or maybe you want to write more creatively, such as in the Hemingway style. In the dark. In the rain. Yep, those phrases would be flagged because they aren't complete sentences.

There are times to break the rules, just make sure you're not breaking the rules because you're too lazy to check correct usage first.

If you want to go a step further, try using the thesaurus to find similar words. Remember the list above - comprehensive, exhaustive, meticulous? Those are synonyms for the word, 'thorough.'

To make your writing really sparkle, try looking up a few words to see if there's a synonym that more completely expresses your feeling and use it instead. Just don't go overboard and make your writing hard to understand.

Microsoft Word has a thesaurus function or you can try http://www.thesaurus.com/ to look up a word.

Now that you know my pet peeves, what words or phrases make you think of fingernails on a chalkboard?